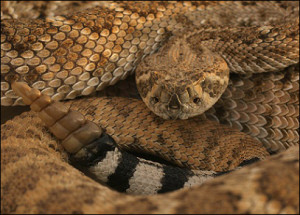 Cottonmouths– Also known as “water moccasins” and are a dark brown, olive green, or solid black color. The juvenile snakes are more brilliantly colored. These snakes get their name from the white tissue inside its mouth, which it displays when threatened. Cottonmouths are heavily-bodies and average about 3-3 1/2 feet long. They are found mostly in the eastern side of the state in swamps, rivers, and ponds.

Desert Massasauga– Light in color and smaller than the Western Massasauga. Found in the western Panhandle.

Western Diamondback– Brown, diamond shaped markings along the middle of the back and alternating black and white rings on the tail. 3 ½-4 ½ feet in length and can reach up to seven feet long. The most common and widespread venomous snake in Texas.

Timber Rattlesnake– large, heavy-bodied snake averaging 4 ½ feet long that is brown or tan in color with wide dark colored crossbands. The tail is entirely black and they are found in the Eastern part of Texas.

Mottled Rock Rattlesnake– Light cream or pink colored with dark, wide crossbands. Small and slender at an average length of two feet. Found in the mountains of West Texas.