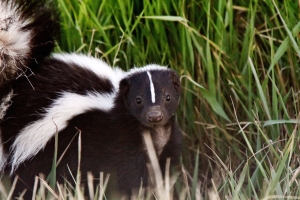 Texas Wildlife Control experts handles Skunk Removal and Skunk Control throughout Texas including Tyler, Austin, Houston, Midland, Dallas, Galveston, Corpus Christi, and surrounding areas. Skunks are often referred to as pole cats and are for the most part black or brown in color with white to cream stripes running down the backside of its entire body from its nose to the tip of its tail. When a Skunk is frightened, it will emit a strong musky foul smell. This spraying is a defense mechanism that makes them an animal that most people do not want to have around.

Skunks will dig holes underneath the front of the steps of a home or building or will dig a burrow under a deck or an outside shed. They are digging these holes in an effort to find a secure place to live and have babies. Skunk Removal is a common service that is requested during the late winter and very early spring times of the year. Skunks will start their breeding process in late February and it will extend through the end of March. Often times you will know that this process is happening because of the amount of Skunks seen ran over on the road. This is a sure indication that skunks are in their breeding cycle. Female skunks will have their babies in approximately four weeks and raise their young throughout the spring. This process is totally unassisted by the male skunk.

Removing Skunks can be a difficult task due to their ability to spray when they feel threatened. Usually a Skunk is removed through a wildlife exclusion or by performing skunk trapping. Setting a trap for a skunk is the most common way for a wildlife control technician to resolve a Skunk problem. After the Skunk have been caught, the Skunk holes which they have dug should be checked and filled in with concrete to assure that no other Skunks in the area will use these open dens.

If you have seen or smelled a Skunk on your property, call and have one of our Wildlife Technicians come and inspect your home or business.