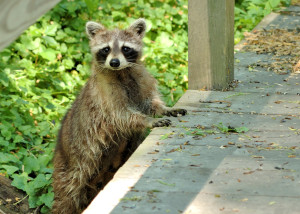 Wildlife Control Technicians have trained professionals in Raccoon Control and Raccoon Removal throughout Texas including Tyler, Midland, Houston, Dallas, Corpus Christi, Galveston, and the surrounding areas. Raccoons are considered nuisances because of the extensive damages they create to homes, attics, and other dwellings. Once the Raccoon is inside a structure, it can cause major damage in a short amount of time.

Raccoon calls are received daily from homeowners throughout Texas complaining of Raccoon infestation problems. The most common complaints are Raccoons in an attic, chimney, stuck in a chimney, in a yard, and in a dumpster.

Despite the cute furry appearance of Raccoons, they are quite destructive. If a Raccoon has gotten into your home, attic, chimney, or any other dwelling, they should be removed quickly before serious damage is done. There are several methods used to get rid of Raccoons such as trapping and Raccoon exclusions. Regardless of the method used, a professional Wildlife Control technician to resolve Raccoon conflicts.

Trapping is the most common way to get rid of Raccoons in the home. This will physically remove the animal but will not ensure that another Raccoon won’t move in. If the Raccoons are trapped and no Raccoon proofing is done to the home, another Raccoon may move in. This is almost certain if a male Raccoon picks up the scent of a female that made its way into your attic. Raccoon trapping should only be used in conduction with Raccoon proofing your home.

There are situation where Raccoon trapping may be the suggested method of removal but these cases are rare. These situations would be a Raccoon living in your yard, eating your pet’s food, or tearing up your garbage. One thing to consider in these instances is that trapping a Raccoon will get rid of that one but will not prevent another one from causing the same problems.

Texas Wildlife Technicians are specially trained to handle all of your wildlife problems. Call to schedule an inspection today!